Back to all posts

In the studio? Don’t shut out your fans! 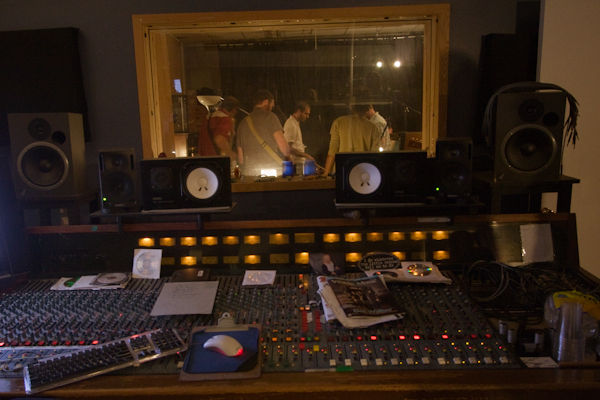 Photo: Elida Arrizza This post was written for Bandzoogle, a website platform for musicians. Bandzoogle is a Montreal-based company, founded and run by musicians, and has every tool a musician needs for their website. Visit Bandzoogle.com to take the tour or get started right away and build your band website free.
Going into the studio to record new music is one of the most exciting times for a band. But all too often when musicians go into the studio, they disappear into their creative bubble and shut everyone else out. Although it’s understandable that you might want to avoid distractions while in the studio, you shouldn’t disappear completely. With so much competition for people’s attention, bands need to keep in regular contact with their fans just to maintain that fan base. And for fans, it’s all about access. Fans want to get an inside look at your career and feel like they’re part of the experience. From an artist’s perspective, the more access you can give, the stronger your relationship to the fan, the more they'll talk about you and your music. And being in the studio is a great opportunity to strengthen the relationship with your fans. So what can you do to enhance fan engagement and create a buzz while in studio? Here are a few ideas: Social Media
Announce to your fans that you’ll be live tweeting certain recording sessions. Post pictures, give live feedback on takes, good and bad.
Post updates on Facebook, including a few pictures from the day, funny stories, etc. Your Website Social media is quick and easy, but you should try to bring fans to your website whenever possible. This way they can find out more about who you are as an artist, sign up to your mailing list, and maybe shop at your online store while they’re there. Here are a few ways to attract fans to your website while in the studio: Post a daily blog talking about each recording session. Use the flexibility and space that a blog affords you by posting in-depth reviews of each session along with lots of pictures. Post extensive photo galleries on your website from each recording session. Same concept as the blog, but you can make it more visual by filming throughout the recording sessions and including some of that footage in a video blog review from each session. Take video to the next level by setting up a live stream of the recording sessions on your website so fans can see in real-time what your recording process is like. Every so often, post a rough take of a song on your website and even ask for feedback on it. This will not only drive fans to your site, but also give you some valuable insight into whether a song is connecting with people or not. Have a contest Being in studio provides a great opportunity to take fan engagement even further by having contests where you offer fans a chance to participate in the recording process. Try making the contest exclusive to your mailing list subscribers. This will not only help increase the number of subscribers, but also reward fans who are already on your list, something you should look to do as often as possible. Here are a few ideas for contests where fans could participate in the studio: These are just some ideas to get you started. But by allowing your fans to be a part of your life in the studio, you also become a part of their lives. And guess what? People like to talk about their lives. So these are the fans that are going to do the best kind of marketing for you, which is word-of-mouth marketing. They’re going to talk about you on Twitter, Facebook and to their friends and family. So the next time you’re planning on recording a new album, consider giving your fans as much access as possible during such a unique and interesting experience like being in the studio. You’ll reap the benefits of creating a more loyal and dedicated fan base, and no doubt gain some new fans in the process too.